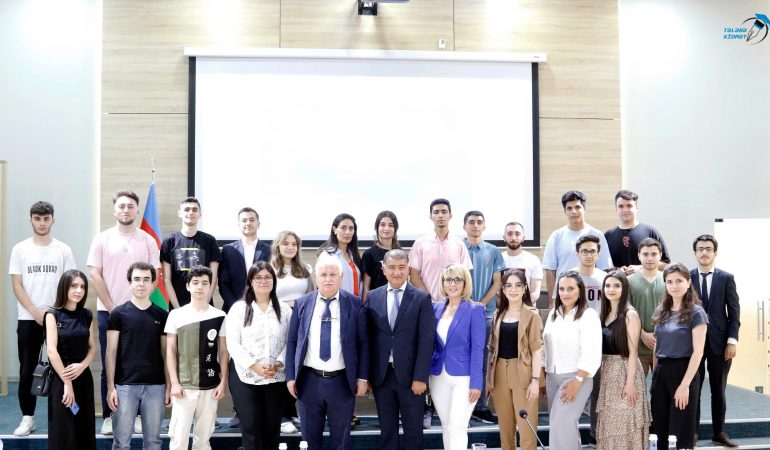 Within the framework of the "Social activity and development of students in educational institutions" project implemented by the International Eurasia Press Fund, the meeting of successful managers with students who differ in their potential, knowledge, and skills continues. The next meeting was organized with Deputy Minister of Ecology and Natural Resources Firdovsi Aliyev.

The President of the International Eurasia Press Fund, Umud Mirzayev, expressed his gratitude to the leaders and management team of the Ministry of Ecology and Natural Resources for the created conditions. Then he spoke about the purpose of the project, the work done and the important role it will play in the lives and activities of students and young people. Umud Mirzayev expressed his gratitude in advance to the leadership of the Ministry of Ecology and Natural Resources, Deputy Minister Firdovsi Aliyev, who participated in the meeting, for their support of this project and for his participation in the sincere meeting with the students.

Later, Deputy Minister of Ecology and Natural Resources Firdovsi Aliyev had a sincere conversation with the students. He talked about his career path until now, the difficulties he faced, his student years, which were mainly physical and spiritual hard work, as well as his life path and current activities. At the same time, the Deputy Minister informed the students about the current environmental situation of Azerbaijan and made notes about the work done in this field, projects and actions. He emphasized that students should live as an environmentalist, regardless of what specialty and profession they study, and saying "Let's not change nature, let's change ourselves", he called on everyone to protect nature and instill it in everyone.

The Deputy Minister answered the questions of the students during a sincere conversation and told them that their priorities in their work and personal life are to love hard work, start again, continue, not lose, and achieve success. Later, Firdovsi Aliyev thanked BAMF Vice-President Gunel Gozalova and BAMF President Umud Mirzayev, the head of the project, who organized this sincere meeting. He said that he was very pleased with the sincere conversation with the students.

It should be noted that in 2022, within the framework of the "Social activity and development of students in educational institutions" project implemented by the IEPF with the support of the Ministry of Education of the Republic of Azerbaijan, 10 higher education institutions (some of them for 2 days), as well as 904 in the central office of the International Eurasia Press Fund 54 training sessions were held for students in 6 subjects. At the same time, there were meetings with Azerbaijani students and foreign students from 14 countries. In addition, a student excursion was organized to the world-famous benchmark laboratories of the Azerbaijan Metrology Institute under the State Service of Antimonopoly and Consumer Market Control under the Ministry of Economy.

If you have any suggestions

you can fill out the application form
YOUR SUGESTIONS
© Telebexidmet.az. All rights reserved.